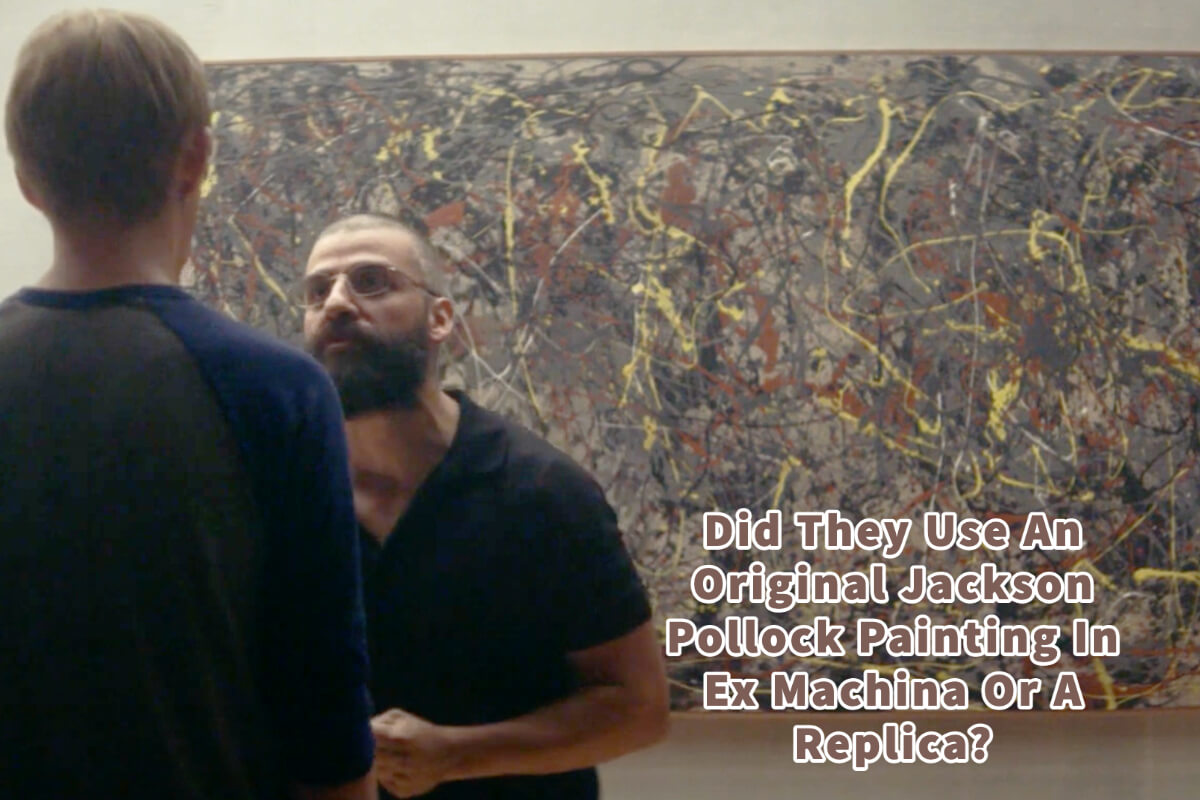 Jackson Pollock’s paintings are popular and used in many films; a Jackson Pollock painting can be seen in the film Ex Machina (2014)

The film Ex Machina would have used a copy of the Jackson Pollock painting No 5 (1948); the painting was sold by David Geffen, a Hollywood producer and film studio executive, for over USD 140 million in 2006. Geffen would have sold the painting long before the movie was produced, and no respectable art collector would place such a valuable work of art on a film set or studio.

The Jackson Pollock painting No 5 (1948) used in the movie Ex Machina (2014) would have been a replica. The reason is that this painting had already been sold in 2006 for a considerable sum of money.

Here are some facts about Jackson Pollock No 5 (1948) and why the one used on the movie set would have been a replica or reproduction:

For all these reasons, and maybe many others, including using the original artwork would not make financial sense or the risk associated with it for a movie prop, the No 5 1948 in the movie Ex Machina would have been a replica of Jackson Pollock’s original painting.

Jackson Pollock’s painting No 5, 1948, was created on a fiberboard measuring 8” by 4”, so it is a large painting. In this painting, Pollock chose to use liquid paints; more specifically, they were enamel paints, even though the work is classified as oil paints.

He used the colors grey, brown, white, and yellow paint drizzled so that many people consider it a very dense bird nest.

Alfonso A. Ossorio originally purchased the painting and composition from Pollock at a show at the Betty Parson gallery in 1949; it was the only painting sold at the show.

When Ossorio’s partner show paint he purchased, he was known to say:

“You spent money on that?”

At some point, the painting was damaged during the moving process. Pollock was told to quickly patch up the painting before it was delivered, hoping Ossorio would not notice the patched-up paint job.

But Ossorio did notice the defect and told Pollock he needed to repair the damage. Pollock took the painting back to his studio. Instead of fixing the painting, it is said that he completely repainted it to a work that is now considered far superior to the original painting.

Ossorio, in speaking of the painting and how the repaint improved the painting he originally purchased, as of the rework of No 5, 1948:

“A wonderful example of an artist having a second chance.”

Jackson Pollock’s painting of No 5, 1948, is an excellent example of how valuable his paintings have become. From the original, sold in 1949 for 1,500 USD, to the painting today, in 2006, it sold for 140 million dollars. It shows how important Jackson Pollock and his work have become to art collectors worldwide.

For such a valuable and iconic painting to be part of a movie, there would be no need to use the original. The movie producers would have used a painting replica or copy as part of their movie props. The painting is far more valuable than even the entire budget spent on the movie.

How Much Is The Jackson Pollock Painting Worth In The Movie “The Accountant”?

By clicking here, you can discover more by reading What Makes Jackson Pollock’s Art So Valuable?.