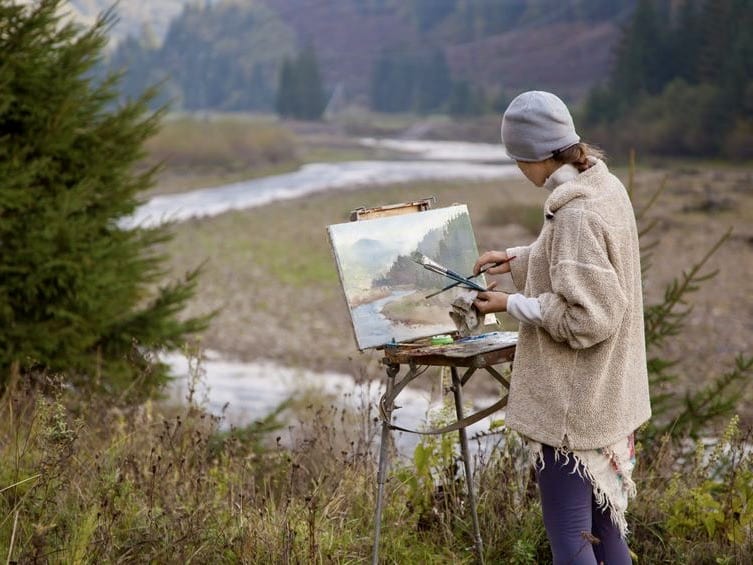 There is something magical about painting outdoors. Many painters throughout history have understood this, especially the group of French Impressionist painters who used the phrase – “en Plein air” painting.

En Plein air means “in the open air. It refers to a style of painting outside in the natural light. This was a term that was made famous by the French Impressionist art movement. Many of the French Impressionists painted most of their paintings outdoors. There was a lot of equipment and other challenges associated with having to paint everything outdoors.

The French term en Plein air is a term that means “in the open air.” Essentially, this means that the artist is painting in nature and painting the subject matter in front of him or her. In other words, you paint what you see outdoors in your own environment using the natural light that nature provides.

The definition I like of en Plein air painting is:

En Plein air painters paint their subject matter outdoors. The natural light that nature provides is very important to them.

This is opposed to painters who would paint everything inside a studio. They would bring their subject matter in and set them up in the studio to paint them and usually set the light and other things in the studio.

Painting outdoors is not new. In fact, paintings have been found in the caves of our cavemen and cavewomen ancestors. But what makes en Plein air painting unique is the subject matter and use of natural light.

In 1830 Charles-Francois Daubigny and Theodore Rosseau who were of the Barbizon School started to paid outdoor settings with a more accurate appearance of the outdoors. Their paintings showed various light and weather conditions.

But the group that is the most famous for using the en Plein air style of painting is the Impressionists. Impressionist artists as Claude Monet, Pierre-August Renoir, Alfred Sisley and Frederic Bazille started to paint a majority of their work outdoors.

It was from France and the Impressionists movement that the en Plein air started to spread around the world. It spread to California and eventually to the American Hudson River School in New York.

Another group that believed in painting outdoors was the Macchiaioli group of Italian painters that were based out of Tuscany, Italy in the second half of the nineteenth century. They started to do a lot of their work outdoors so that they could capture the natural light, colors, and shading in their paintings.

The Newlyn School in England also started to engage in en Plein air painting in the latter part of the nineteenth century. Part of what started to help them was that in 1841 the introduction of paints being in tubes, similar to how we purchase most of our paints today.

The Challenges and Equipments

There may be many who ask – well why don’t all artists paint outdoors? There were a lot of challenges to be able to paint outdoors. Though technology has helped some of the challenges like the inventions of the paints in tubes, many of these same challenges still plague artists today.

Even today painting outdoors or with en Plein art can be challenging. Weather, bugs, animals, onlookers disturbing you, or just the challenge to move all your equipment to where you want to paint. Imagine then how challenging it was for the artists in the mid nineteenth or early twentith centuries.

Many of their challenges woud have been with the equipment and supplies they could use.

Before the invention of paint in tubes, many of the artists or their assistants would carefully ground each pigment of paint and then mix the binding oil into the correct proportions to make the paint. This could be a very messy and difficult process to do outdoors. For most of the artists, this was not practical and was much easier and better to do within the confines of their art studio.

The Invention of the Paint in Tubes

It was not until 1841 that the paint tube was invented by the American portrait painter John Goffe Rand. Before this time things as pig bladders or glass syringes would have been used. Rand’s invention of the paint tube really helped with the issue of mixing and carrying the paint to paint outdoors. The tube gave paint a longer shelf life and since it did not leak it could be open and closed time and time again.

Another huge challenge was the easel. Before the time of en Plein air painting, the easels were very bulky and hard to carry around. An artist would need to have an assistant or even a few assistants to help them carry an easel and all the supplies they needed if they wanted to go outside to paint.

For many of the impressionist artists who did not earn little money during their lifetime as Vincent Van Gogh, this would be been economically impossible. This is why the invention of the pochade box easel was so important.

We are not sure who invented this pochade box easel but we know it was invented in the 19th Century around the time the en Plein air painting became popular with the French Impressionists. This portable easel that is so common today is also known as the “box easel” or the “French box easel. “

A really unique invention as the easels were highly portable with built-in storage compartments for the artists to put their paints, palette, brushes, and even wet canvases. This box easel allowed the artists to be able to go out to paint without having any help as they could carry all their supplies themselves.

Today these easels continue to be the most popular way for en Plein air artists to carry their out supplies to paint. Here some box easels that we recommend:

Most en Plein air painters are limited by their canvas sizes they can bring with them to paint outdoors. They are limited by canvas sizes that they could safely carry back and forth to the spot they are painting. For most pochade boxes the canvas size is usually no more than 20″ though the easel part of the box may allow you to hold a large canvas.

The canvas size is still a limitation for most people who are doing en Plein air painting today. Generally speaking, you can only really paint on the canvas size that you can safely carry with you back and forth to the painting location.

Paint Types and other issues.

Many of the en Plein air painters are also limited by the kind of paints they can use outdoors. For example, many of the acrylic paints used today may harden too fast in the warm sun so they may not work well with painting in an outdoor setting.

Paints and palettes could get bugs in them or animals could disturb the paintings or even your palette. There could be unwanted onlookers that disturb your painting or want to touch it. A sudden gust of wind could blow the painting and all the supplies away. Or the painting and the paints could get almost destroyed by a sudden change in the weather as a thunderstorm.

En Plein air painting or painting outdoors in the natural sunlight is a painting technique that has lasted for centuries. The reason is that for some subject matters nothing can beat being able to actually be outdoors to paint what you see right there in nature – right in front of your eyes. This is what the French Impressionist masters taught us when they painted their paintings outdoors.

During the era of impressionism art, fine-art oil painting was an extremely important addition to the interior design of a home, especially for the affluent and the increasing arrival of the middle classes. For these art patrons,  there were only some very specific styles of art that they considered acceptable for them to use for the interior design of their home and impressionism art did not fit into any of these culturally acceptable fine art categories.

To find out more about this you can read our blog on Why Was Impressionism Art at First Rejected? by clicking here.

Who Were Some of the Women Impressionist Artists?

To find out more you can read our blog on 7 Women Impressionist Artists, To Admire, Know and Remember by clicking here.