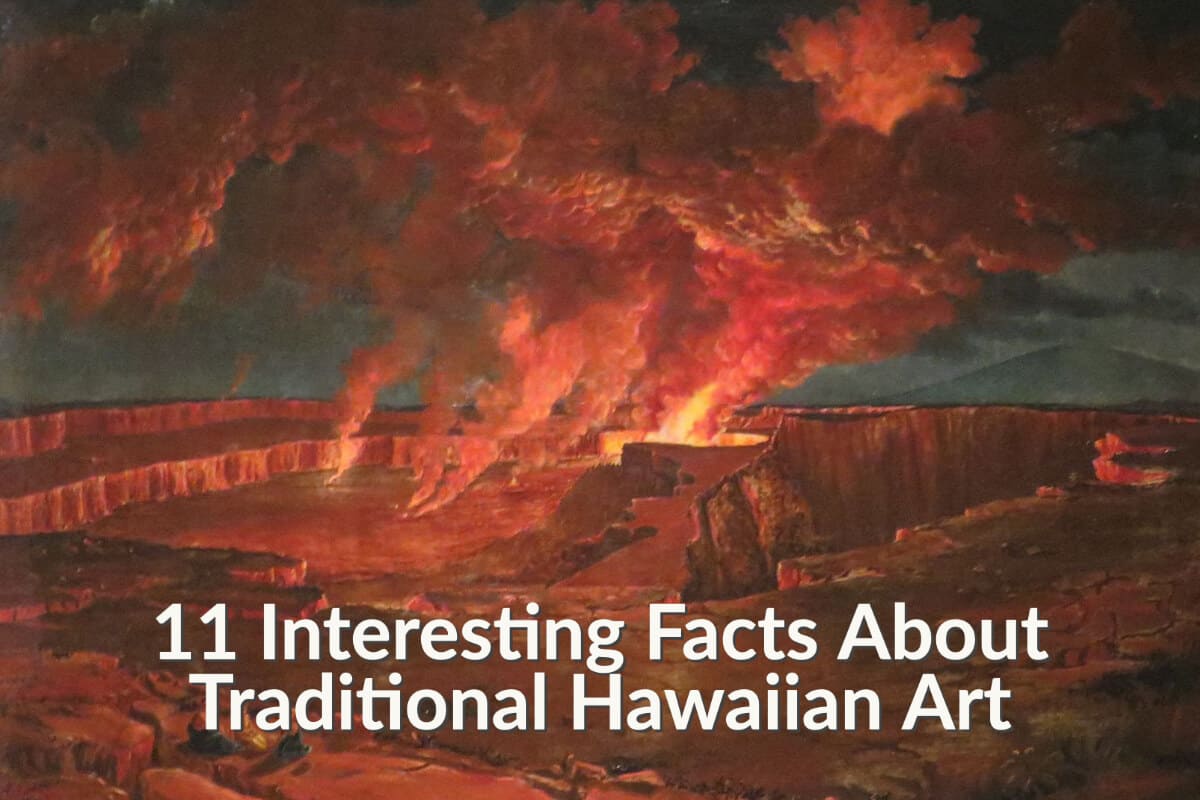 Anyone traveling to Hawaii should also learn a bit about Hawaii’s art and culture. Hawaiian art has a fascinating history.

Hawaiian art is divided into three main periods of art: pre-European art, Nonnative Hawaiian Art, and Hawaiian Art With Western Influences. After Captain Cook arrived in Hawaii in 1773, traditional Hawaiian art changed as the western culture started to influence Hawaiian art. The Volcano School of Art developed in Hawaii in the late 1800s when the artist’s work became impacted by the live volcanic eruptions in Hawaii.

Below Are 11 Interesting Facts About Traditional Hawaiian Art:

1 – There are 3 Main Periods of Hawaiian Art

Hawaiian Art is usually divided up into three main groups of art. Each of these groups are defined as:

Kapa cloth is based primarily on the creative combination of basic bold yet linear elements and forms.The Kapa fabric was used primarily for traditional Hawaiian clothing. Most of the work of the Kapa cloth was done by women; the mothers would pass down this art form to their daughters.

Another interesting traditional Hawaiian art form was Kakau, or the Hawaiian art of tattooing. Hawaii was governed by a strict Kapu or a taboo cultural system; the tattoos became part of this system.

The tattoos also served as part of the recognition for the class or caste system. The tattoos were for ornamentation, class distinction, and to help the health and spiritual well-being of those who had worn the body art.

The images used with Kakau or Hawaii tattoo art varied from lizards that were greatly respected and feared and symbols like the Hawaiian crescent fan. Intricate patterns tattooed on Hawaiian men’s arms, legs, torso, and face would mimic woven reeds or other natural forms. Women were generally tattooed on the hand, fingers, wrist, and sometimes the tongue.

Not just anyone could apply these tattoos; highly-skilled Kakuna art experts applied the tattoos. The design also varied as much as the Kakau tattoo artist’s ability and experience. The entire process of the Kakau tattoo art was also a highly guarded secret.

The arrival of westerners to Hawaii and then the subsequent formation of Hawaii into a state of the United States has greatly influenced the art of native Hawaiians. A great deal of the art produced by the native Hawaiians and long-term Hawaii residents now incorporates western materials and ideas.

Even today, most Hawaiian artists will keep their subject matter distinctively Hawaiian while incorporating the art with materials from the west. That is why most of the art produced in Hawaii integrates an artistic melting of traditional Hawaiian art and western art.

7 – The Volcano School of Hawaiian Art

The Volcano School of Hawaiian art was formed by a group of non-native Hawaiian artists who started to paint dramatic scenes from Hawaii’s two active volcanos. These western artists were fascinated with Hawaii’s intermittently active volcanos in the 1860s and 1890s in Kilauea and Mauna Loa.

To even get to the volcano to paint the volcanic eruptions was a huge feat. The volcano in Kilauea was a two or three-day round-trip journey on horseback. One of the most important artists of this Volcano School was Jules Tavernier (1844 – 1889).

In 1878, Walter M. Gibson, a member of the Hawaiian government, wanted to commemorate the hundred-year arrival of Captain Cook to the Hawaiian islands. The legislature approved a statue to be made of King Kamehameha for $10,000. They hired Thomas R. Gould, a Boston sculptor living in Florence, Italy, to create King Kamehameha’s statue.

Hawaii now has two King Kamehameha statues. The original statue stands near Kings Kamehameha’i place in Kapa’au on the Big Island of Hawaii. The 2nd statue stands in front of the Ali’iolani Hale, which is now home to Hawaii’s Supreme Court.

9 – The Hawaiian “Percent For Art” Law

In 1967 Hawaii became the first state in the United States to implement a “Percent For Art” law. This law states that 1% of the construction cost of any new public school or state buildings would be designated to acquire artwork. These works of art could be purchased by commission or by an outright purchase.

There are 4 major locations n that world that you can view collections of Hawaiian art. Three of those locations are in Honolulu, Hawaii, on Oahu’s island, and the last location is in Germany.

11 – Word For Art in the Hawaiian Language

You can discover more by reading What Is The Main Difference Between Japanese and Chinese Art? by clicking here.