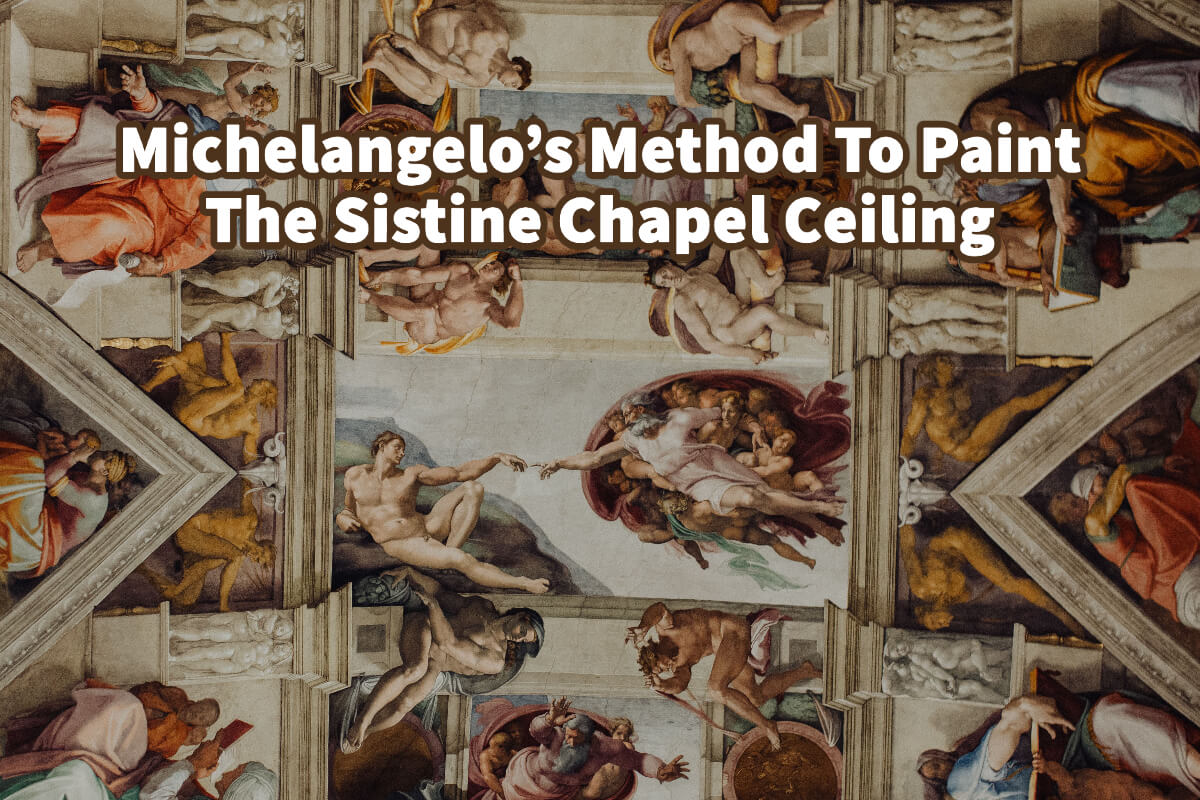 When most people think about Michelangelo, they think about his statue of David and the ceiling of the Sistine Chapel. Artists are in awe of his ability to paint such a magnificent work of art on a ceiling.

The painting was highly strenuous work that came at a substantial personal cost, both physically and mentally, to Michelangelo.

Michelangelo’s And The Sistine Chapel

When you view Michelangelo’s fantastic work for the Sistine Chapel, it is a wonder that such exquisite work could be done on the ceiling.

When Michaelangelo painted the ceiling, there was artwork by other artists around the chapel, but the ceiling was only painted a simple blue to match the color of the sky, and some painted stars were scattered on the ceiling.

In the early 16th Century, Michelangelo was already a well-known artist because David’s statue was a great success. He had an excellent artist reputation for being able to paint and sculpt a life-like anatomical figures for his statues and painting.

Michelangelo was already a favorite artist of Pope Julius, so he had access to both the Pope and the Vatican. Given Michelangelo’s reputation and access to the Pope, there was no surprise that he was given the commission to paint the ceiling of the Sistine Chapel. The chapel walls were already adorned with frescoes by Botticelli Ghirlandaio, Perugino, and other famous artists.

We know Michelangelo was a favorite of the Pope because, despite the fact he had minimal experience working with fresco painting, he was still given this lucrative and essential commission. He was best known as a sculptor, yet the Pope entrusted him with such an important fresco painting commission.

The Preliminary Work For The Sistine Chapel Commission

The Pope thought that Michelangelo should depict the twelve apostles on the ceiling. But Michelangelo had bigger plans and wanted to paint several intricate scenes instead.

He also realized that he wanted to do something grand with the chapel’s ceiling. He locked himself away in the chapel and started sketching. He began to work using trial and error to decide what and how to paint the chapel.

His first design was simple, probably something more of what the Pope had initially asked for of the twelve apostles with some filler decoration around them. But for Michelangelo, that did not seem right for the ceiling and the space.

He then started to design something more ambitious and grander, which is the design of the ceiling that we have today.

Michelangelo was to paint over 300 different figures on the chapel ceiling. The preparatory work alone for the chapel was to take several months. He stated on the preliminary drawings in April 1508 and did not complete the design until late July 1508.

To paint a ceiling is challenging, and painting it in the 16th Century must have been highly problematic. To reach the chapel ceiling, Michelangelo had to create special scaffolding.

We must remember that Michelangelo was by all accounts a sculptor and fresco painting on a ceiling, was not his expertise. Painting such an intricate piece of art on a ceiling proved highly strenuous.

Michelangelo’s scaffolding was specially built to remove the strain of the work and allow the artwork to be completed as quickly as possible. The scaffolding was built with brackets secured with holes in the walls.

The scaffolding allowed Michelangelo to get about 60 feet in the air and close to the ceiling. Even with the scaffolding in place, he still had to strain and exert himself to do the painting.

Michelangelo applied washes of paint to the wet plaster for the fresco technique of painting.

Michelangelo would mix sand and lime for the painting method and then spread the mixture over the ceiling. Next, they would apply the colors, which he would need to do quickly while the plaster mixture is still wet.

If the color were added when the plaster mixture was dry, the colors would fuse chemically with the lime and become permanent.

The fresco method was not easy to master but once mastered, the results of what the artist could create were stunning, and the work and paint would last for a very long time.

To create an illusion of depth, Michelangelo would scrape off some of the wet mediums before painting to make some outlines. His method created some visible outlines around his figures; it is a detail unique to Michelangelo and his painting style.

Listen To Our Podcast About Michelangelo And The Sistine Chapel Ceiling below or by clicking here.

Personal Cost To Michelangelo Due To The Sistine Ceiling Work

Many people do not realize the high personal cost to Michelangelo’s mental and physical health and the tremendous strain it caused him to do the work on the Sistine Chapel ceiling. The work was challenging and strenuous.

Working the ceiling, Michelangelo was constantly stretching and straining his neck to reach the canvas. And despite the special scaffolding that he created, he could not complete the work without using extreme exertion.

Every day Michelangelo would need to mix up the plaster and then use a trowel to put it up the scaffolding to the ceiling. Then he was under pressure to work very quickly to paint his subject matter before the plaster dried.

Physically it was highly strenuous work for even the fittest artist. He would have had to lift, apply and paint everything above his head, all while working 60 or more feet above the ground.

And he did not just do this for a short time to paint the Sistine ceiling, but the painting of the ceiling took him four years to paint. So daily for over four years, Michelangelo was putting his body under stress and strain.

Working that close to the ceiling and in what must have been not very good light also caused a tremendous strain on Michelangelo’s eyes and ruined his eyesight. For the rest of his life, Michelangelo suffered from poor vision due to the stress on his eyes while working on the Sistine Chapel Ceiling.